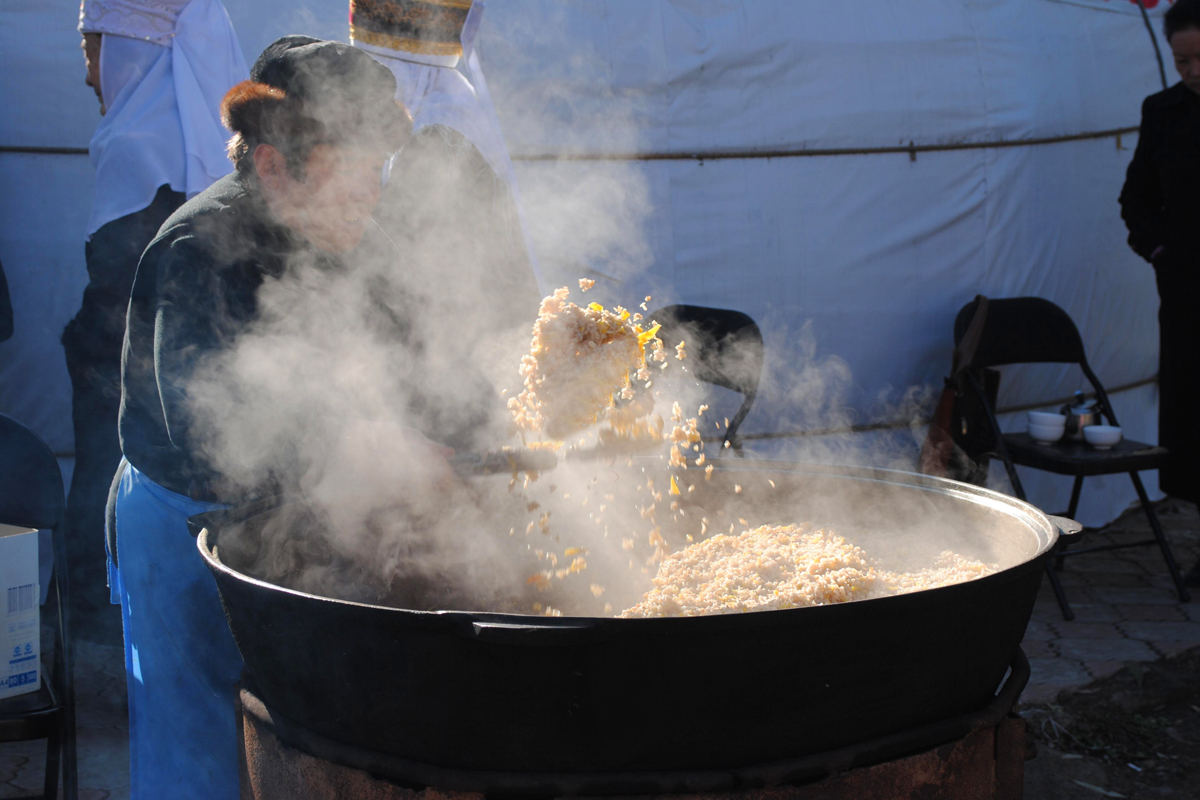 National cuisine in Kyrgyzstan is especially rich and diverse. It has been developed throughout the history of Kyrgyz people and collected the most delicious dishes and beverages from the period of nomadic life, and dishes of neighboring nations in the region as well.

As the nomadic lifestyle required a lot of strength and energy, the national dishes of Kyrgyz people had extraordinary nutritional and caloric content. Their main ingredients were meat, milk, flour and cereals.

Most traditional dishes don’t do without meat. Kyrgyz people like to eat lamb, beef, yak meat, and especially horse meat. The most famous dish is the Kyrgyz beshbarmak. It is boiled chopped lamb with onions and noodles, poured with broth. The name of this dish is translated from Kyrgyz as "five fingers", and it is traditionally eaten with the fingers. The traditional soup “shorpo” is also popular among peopole. This is a hot broth with chunks of meat, potatoes, carrots and greens. The dish of fried meat is called “kuurdak”: meat (lamb, beef or horse meat) is being cut into large pieces and fried with onions on the fat of tail. Horse meat sausage “chuchuk” and sausage from the liver and blood with spices “byzhy” are considered as real delicacy.

Dairy products also are an integral part of Kyrgyz people’s meals. They like to drink ayran, very thick fermented beverage made from sheep's milk. The key to good health and longevity has always been drinking of “kumys”, an extremely beneficial drink of fermented mare's milk prepared on the jailoo in summer. Traditional types of cheese “syuzmo” and “kurut” (solid small white balls with a salty taste) are also made from milk. Syuzmo can be diluted with water, then you’ll get the best thirst-quenching beverage “chalap”.

Traditional beverages are also made from millet and barley. Bozo is a national drink, similar to beer, which is made from millet, wheat or corn.  Particularly popular summer drinks “djarma” and “maksym” are made from barley flour “talkan” in the process of fermentation.

No dinner is complete without bread. Usually it is round-shaped. It is baked in a cauldron (“kemkerme tokoch”), in a frying pan (“kemechten”) or in oven (“tandyr-nan”). On holidays people cook a special regale “boorsok”, fried sweet pieces of dough.

Every meal is accompanied by a cup of tea. People drink black and green tea, with milk, cream or melted butter. After a long journey tea perfectly quenches thirst, and after receiving high-calorie fatty foods tea is a real lifesaver for the body. Tea is usually drunk from a special bows pialas.

Its also common for Kyrgyz families to cook dishes borrowed from other nations. These dishes refer to Dungan and Uighur cuisine. They are ashlyam fu and lagman (noodles with spicy sauce, meat and vegetables), manti and chuchvara (boiled dough stuffed with minced meat). Pilaf (a dish of rice, carrots and meat) came from Uzbek cuisine. It is usually cooked for holidays and festivities.