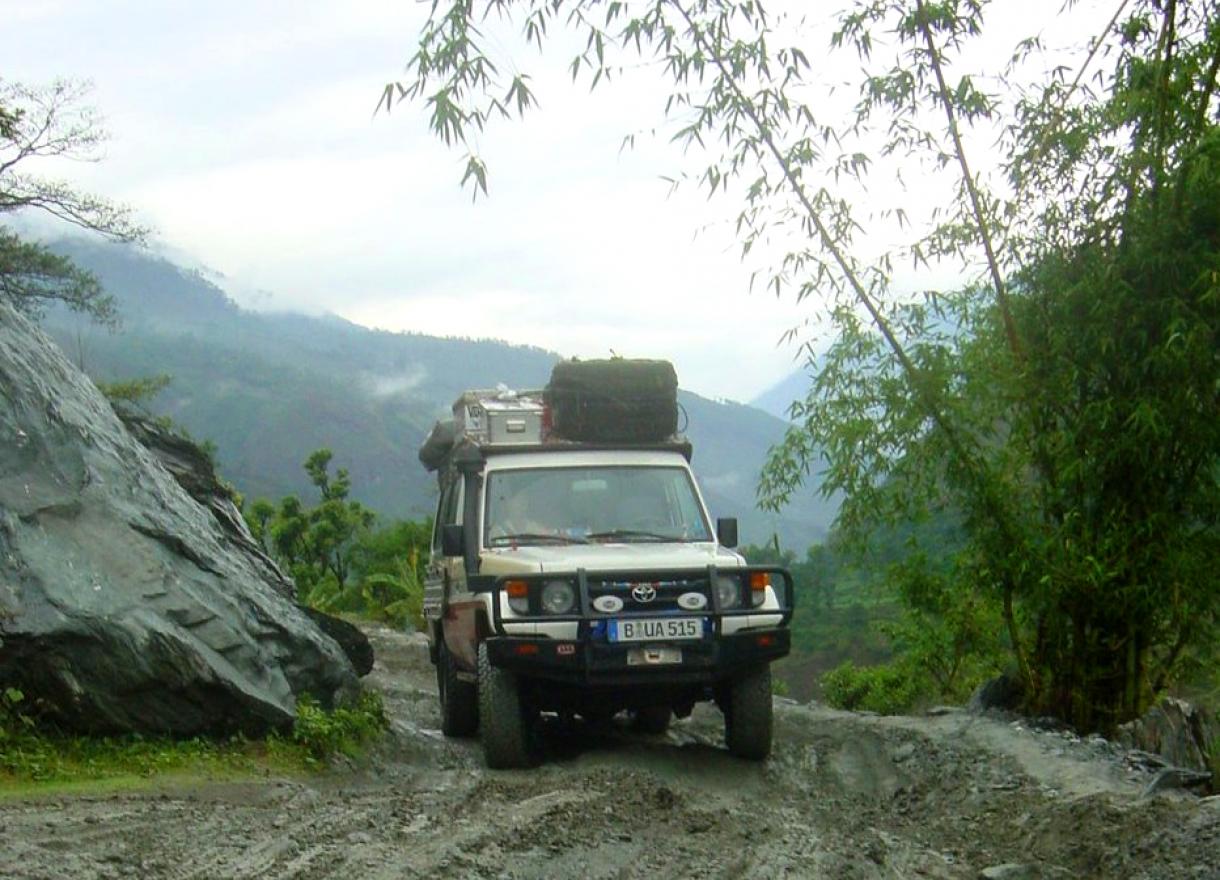 First place that we visited, when we finally arrived to Kyrgyzstan, was Tash-Rabat, marvelous green alpine valley, where caravan-saray was located, crossroad base for caravans, a place where they could rest and relax after exhausting travel across Takla-Makan desert. 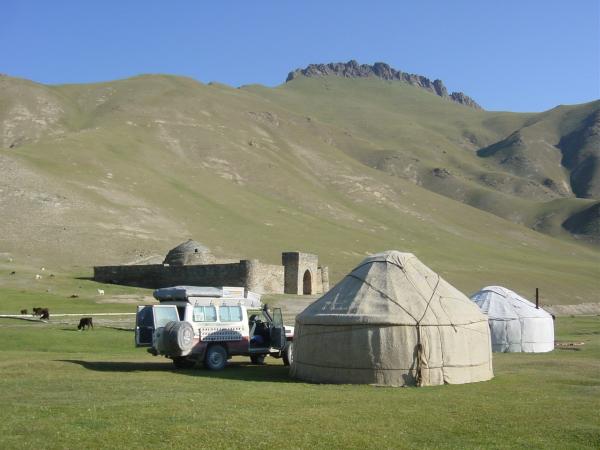 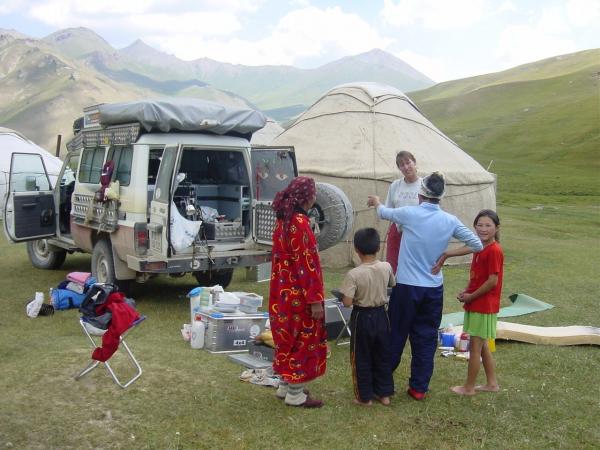 We found here a couple of families, that lived here recently and brought with them horses and herds of other animals. During the summer they descend down to valleys, where they sell horses and buy new yurts, made from wood and felt. But they aren’t like tents or camps, it is something different, but it’s big thoroughly-planned house for whole family, which schematics are passed down from generations for many centuries. When we arrived we were placed on the spot reserved for honored guests, where we were served with beverage, brewed from fermented mare’s milk, called kumys. We were polite and drink it all, though the taste was really unusual. Yurt was offered to us as quarters for the night and we drank tea all night, because all families across the place wanted to talk with us and it is a common custom to serve tea when you have guests. 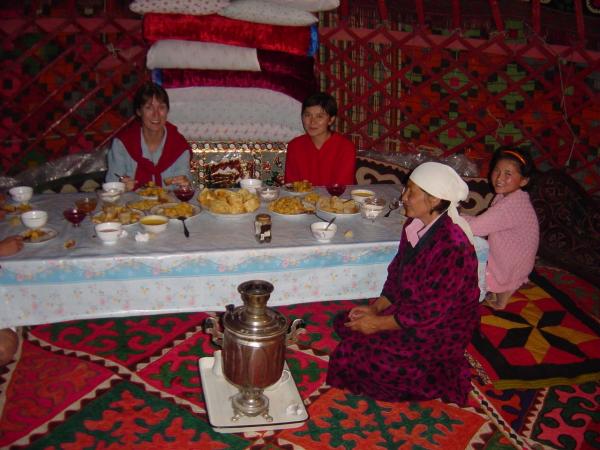 Because life of a Kyrgyz mostly passes on the back of a horse we were considering that our entire experience of Kyrgyzstan would come under label "1 horse power off-road tour." The ride through wide, wild green edelweiss flower valley is a fantastic dream. But then we heard that the next day that two sheeps were torn apart by wolves close by, and we quickly moved from the yurt where we stayed to our landcruiser roof-top tent. The ladder was a bit more as a safety precaution to us, than the thin layer of felt at the yurt's main entrance. 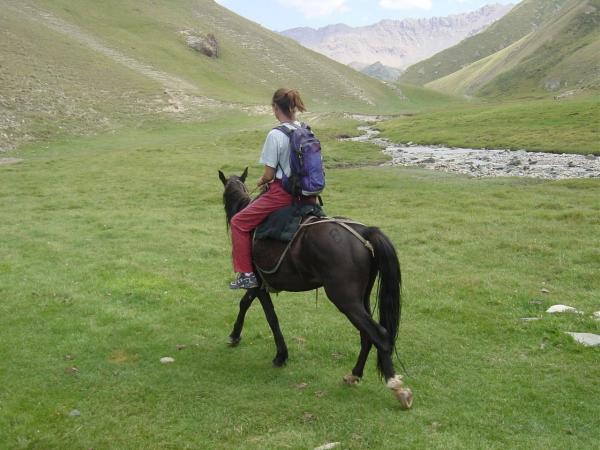 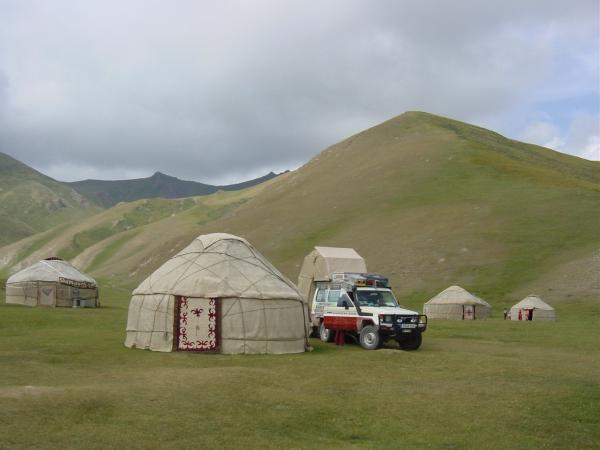 I'd rather prefer to be in the "landcruiser yurt"

Two days later with heavy hearts eventually we had to leave our hospitable friends in Tash-Rabat. Time was running short, and we have to get to Bishkek quickly to get our documents done for further travel.

We liked Bishkek very much, especially its parks and peaceful green streets. With 100 sqm2 of green vegetation area per resident, Bishkek counts amongst four of the greenest capital cities worldwide. Wind of change is in the air and misadventures of the past is slowly fading off. 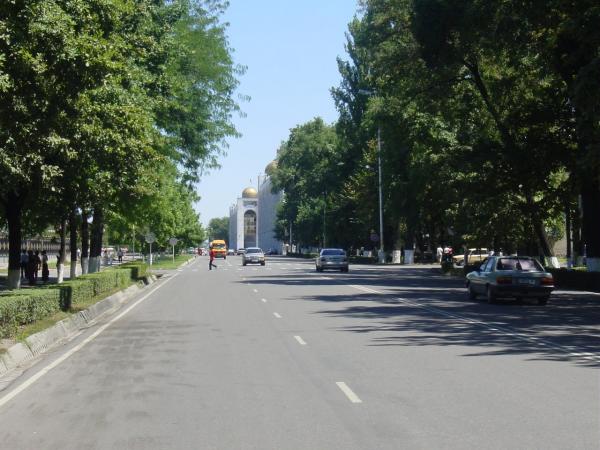 We drove from Bishkek towards the huge mountain lake of Issyk Kul, most famous tourist destination in Kyrgyzstan. We were recommended to visit a very nice family directly at the southern coast of the lake. We set up a camp right next to the yurts within a canyon. We spend a few beautiful days with aquamarine blue water, beach and sun. Snow-capped mountains on the background is a wonderful scenery for any lake! 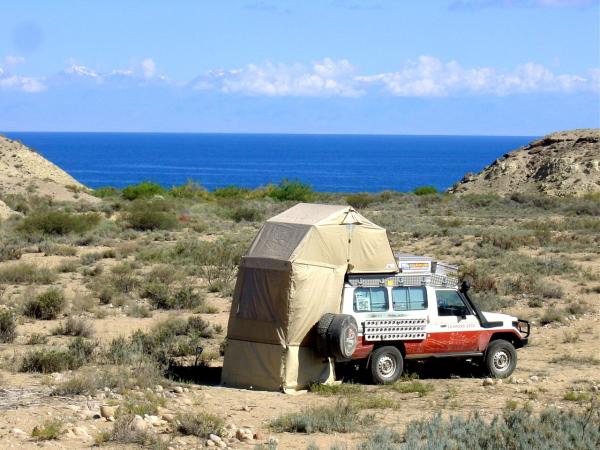 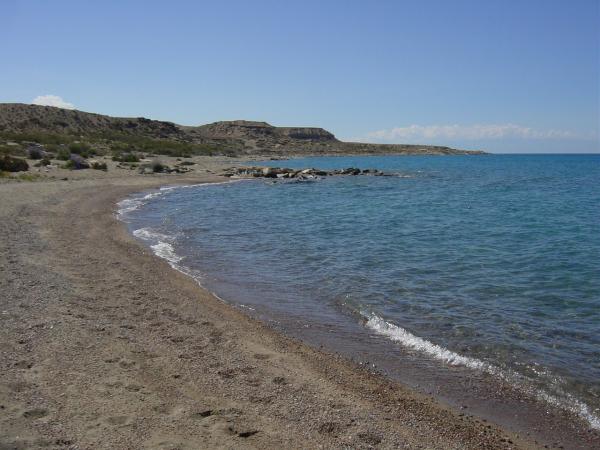 Kyrgyzstan word of mouth gets us interested in the annual national riding games at Song Kul. We were lucky to be around when it these games are just about to start. Again a nomad family gladly takes us in. 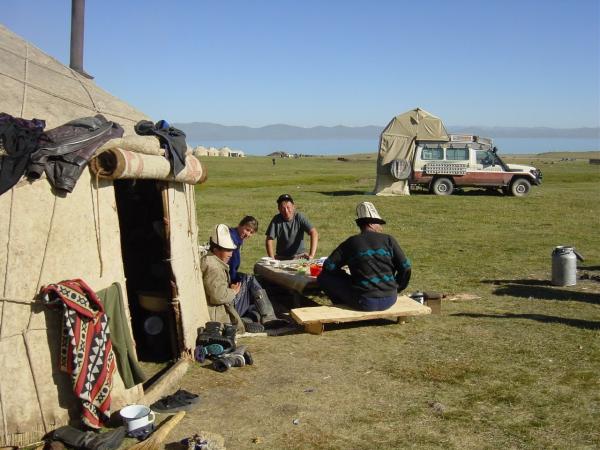 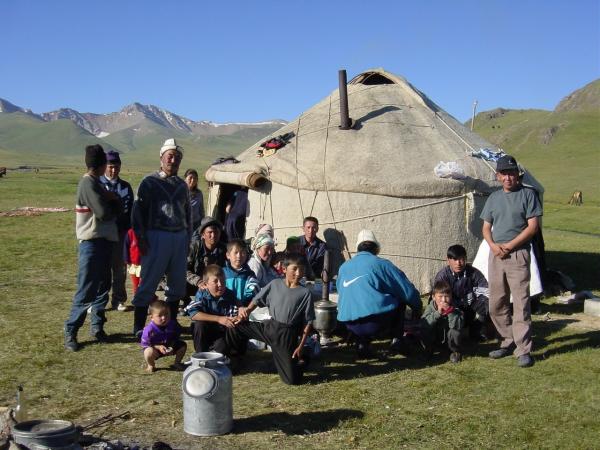 A first class show of Kyrgyz horse-riding tradition was finally on the edge! We came up to the mountaneous region on a hill, which was a great natural grand tribune, where thousands of spectators could enjoy performances and competitions of best riders in the country, who came there to show their talents. Event had started from the parade, riders, both men and women (which is already amazing, Kyrgyz women are natural riders, they sit on a horseback like they were doing this for all of their life, which actually could be true) in traditional clothing, sitting on camels and horses, it was just like first-class theater. The atmosphere of the event was comparable with major game at world championship football.

Entertainment of Kyrgyzstan horse-riding tradition finally awaits us! Event site was located in the mountaineous region, on a hill. That hiill was acting as a natural grand tribune, where thousands of spectators and the best horse-riders of the country would gather to show their talents. The parade started with riders, dressed in traditional clothing, sitting on horses and camels. The atmosphere is comparable with the final game at world championship football or premier league! 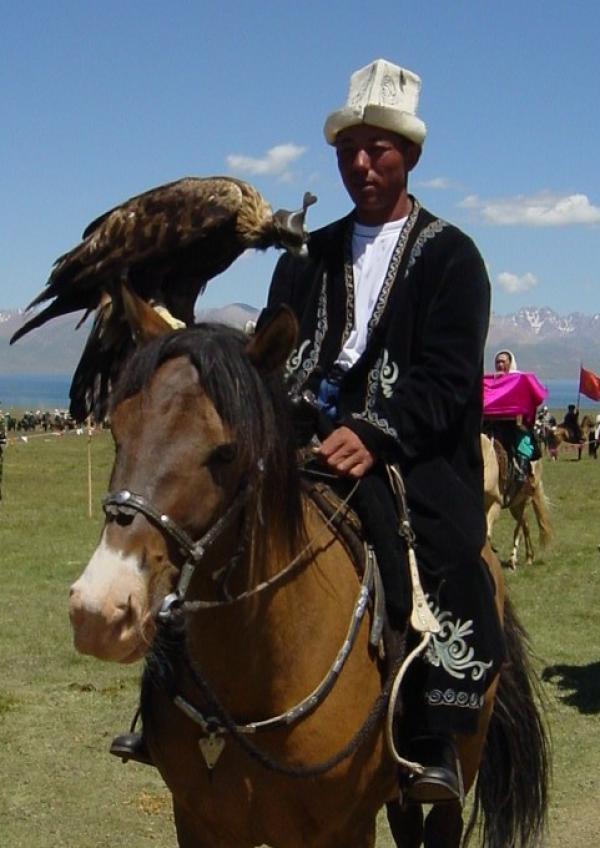 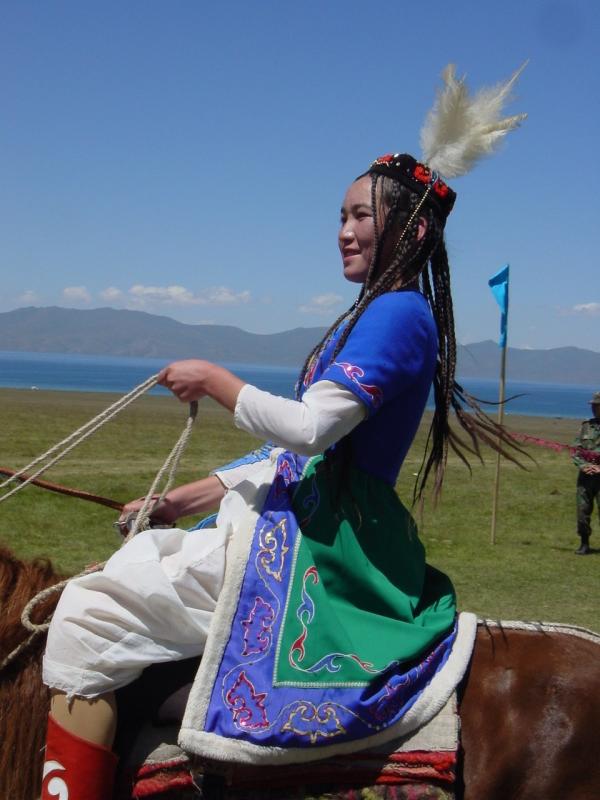 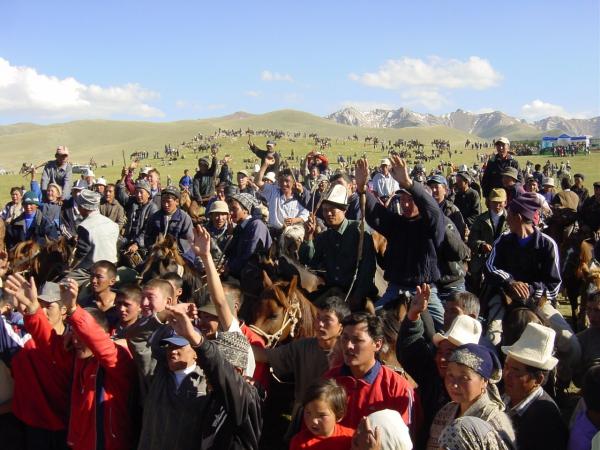 We left our family of our kyrgyz hosts with heavy hearts. Family matriarch, grandmother came to us with a vial of kumys and a bottle for our journey. Before we even said something, she swiftly put it into the car, poured us a cup ant took the last bits of solid material (that appears to be part of milk fermentation procecces) out of the milk with her bare hands. With so much of her warmth, we just naturally drink our full cups down and enjoyed it. 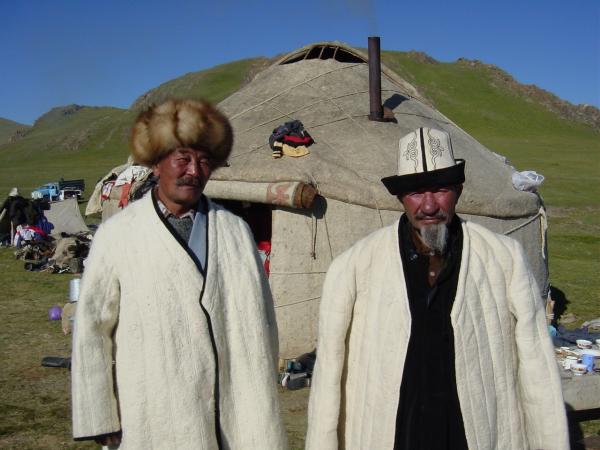 Next 400 km we drove to Kyrgyzstan in south-western direction. The scenery changes from high-mountainous forests to dry canyons and back again before we arrived to the very easterly edge of fruitful Fergana valley, that feeds thousands of people around the valley. Fields of sunflowers, cotton fields, grain fields and bright green meadows are looking as fileds of gold as far as the eye can see. Water is one of the most plentiful resource across Kyrgystan. When we arrived in Osh, we enjoyed getting familiar with over 3,000 year old history of that city and one of the oldest in Central Asia. But unfortunately there is no hint of the old important trade and caravan trails of the Silk Road nowadays. Very colorful bazaar is the only witness to the hectic goings-on of times past. We we upset, but we had to prepare for the border crossing to Uzbekistan here and leave Kyrgyzstan, but it was an ejoying experience to get along with kyrgyz people through our journey. 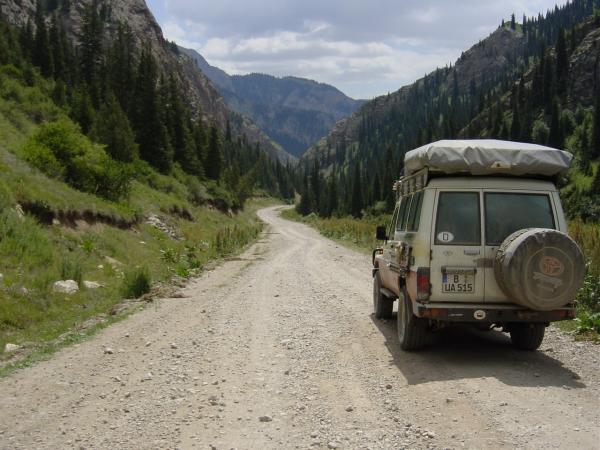 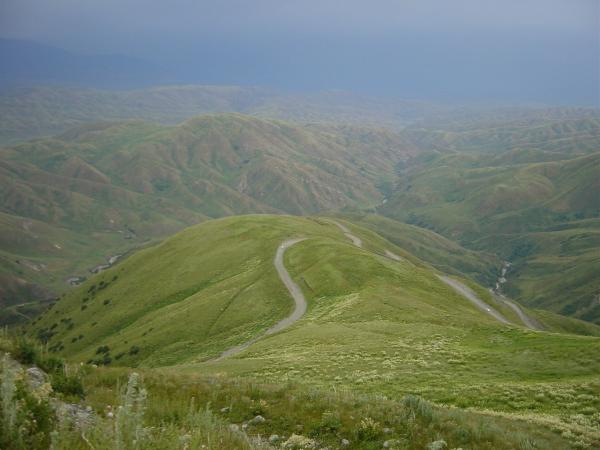 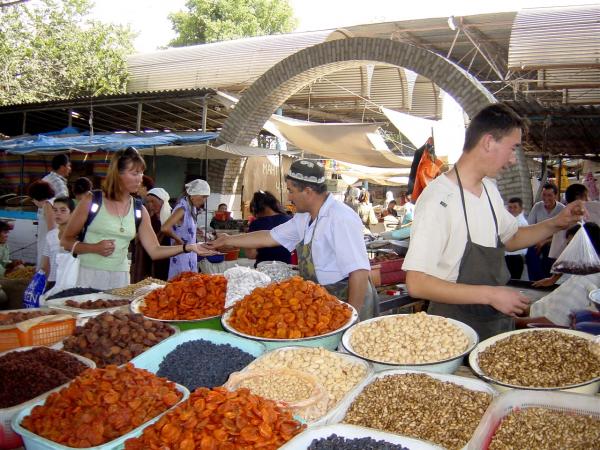