“Felt is a dense textile material without any threads, manufactured from felted wool or of synthetic fibers, which are tightly linked together with the help of hot water and steam. Such material-making is called felt-wallowing”.

This is the brief description from encyclopedia. No wonder that in the understanding of a modern man it is something archaic, like granny boots and galoshes. It would seem logical to say that felt is an outdated material in every perspective, but it’s surely not!

Felt is used not only for old-fashioned boots, but also the wonderful world of interesting, useful and fun gizmos - felt products can be of many different colors, soft and very comfortable. You can make a lot of things out of felt, and most importantly, it will be fashionable! But let's start from the origins.

Felt has been known since ancient times. According to the Bible it was discovered by accident when Noah spent a long time wandering in his ark and watching sheep. Historically, felts were used extensively by Eurasian nomads living in Tibet areas, the Caucasus, Altai, Carpathians and the Balkans. Felt is very light, easy to use, retains heat and insulates sound, making it extremely practical. The word "felt" came to us from the Turkic dialects and it means felt material made from the hair of animals - sheep, goats and llamas. Felt-crafting is the most ancient techniques of working with wool and there are reliable sources, confirming that a person has mastered the art wool before knitting or sewing. Animal hair neatly gathered during molting, and first primitive clothing was made and centuries before mankind learned to weave, spin and knit. With the domestication of animals wool gathering process became much easier and more productive, because it was possible to collect wool straight from the animal. Besides the felt was also a perfect material for the first coating, which then became the carpets and bunting for that special sheltered dwelling of nomads - yurts. Interestingly, the manufacturing process was handed by men because it required considerable physical effort. People learned quickly how to decorate felt with paint, cut it and sew patterns.

Europeians did not stayed on the sidelines, active usage of felt came to them with the Mongol invaders. The harsh climate and lack of resources did the trick, and the culture of felt were settled in the northern expanse, giving felt boots, utility cloth, hats, pouches and many others. Felt is also used in outerwear and as an insulation of houses. 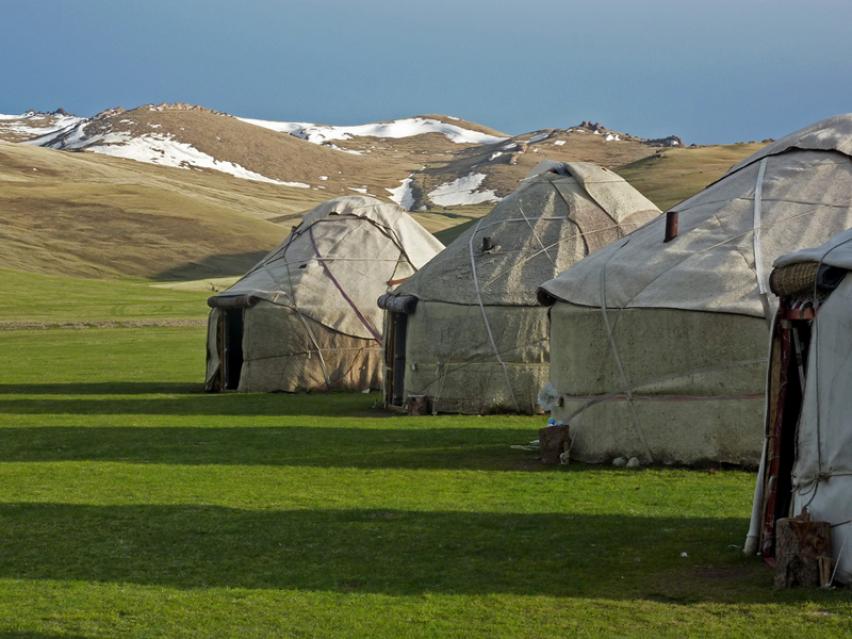 Today felt is harvested on an industrial scale by large enterprises and factories. Modern technologies and techniques allow you to attach a variety of felt colors, change its texture and even elasticity. For dyeing soft felt types natural extracts and colorants are used.

Nowadays felt is experiencing a period of prosperity and popularity. In Europe, an International Academy of Felt, which students annually go to Central Asian countries to immerse themselves in the studies of intricacies of this ancient skill.

In addition to being manufacturing material do not forget about the creative part. Modern artisans make from felt wide variety of soft toys of all colors and sizes! Want some animals or fashion accessory just look and choose! Small rabbits, bears, cats and chanterelles successfully win the hearts of children and adults worldwide. Felt products have become the new trend, they are collected, given and sold around the world. Most interesting and original products even exhibited in museums and showrooms. 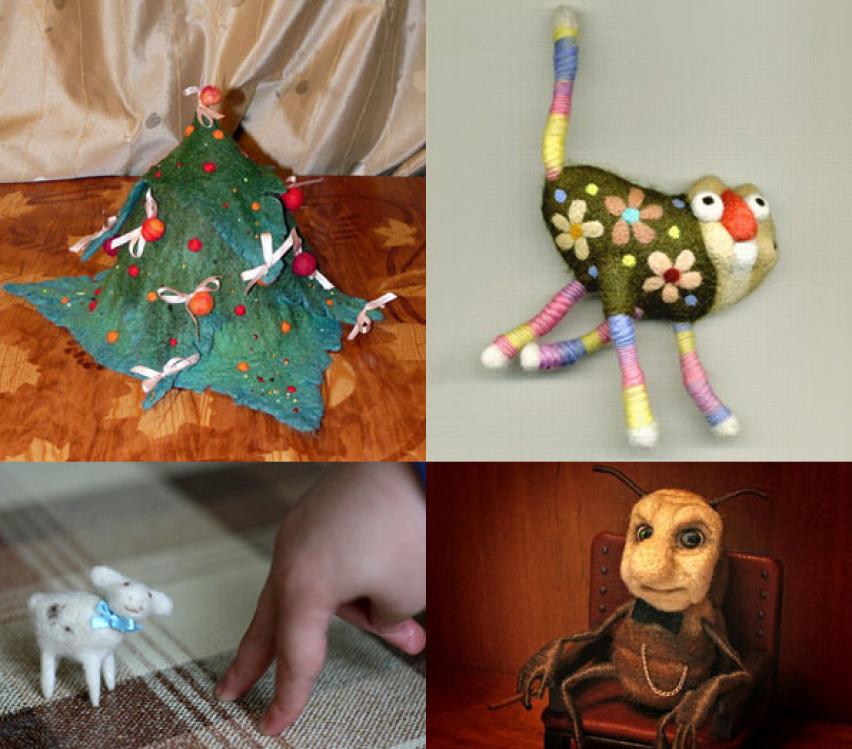 Other no less pleasant felt types are used as ornaments, necklaces, earrings, bracelets and necklaces. Masters also use bright felted beads and can sew, weave or glue them with a variety of materials, such as pins, rubber bands, bags, scarves, cases and covers. We can list most incredible jewelry for all day, but the most important thing is that every product is unique, and making exact replica is impossible! You can be sure that you are the owner of an exclusive artwork!

Additionally there is felt-made ​​purses, Coin purses, spectacle cases and cases for mobile devices, the appearance and quality of which stands out against any standard accessories which you can meet on the street. 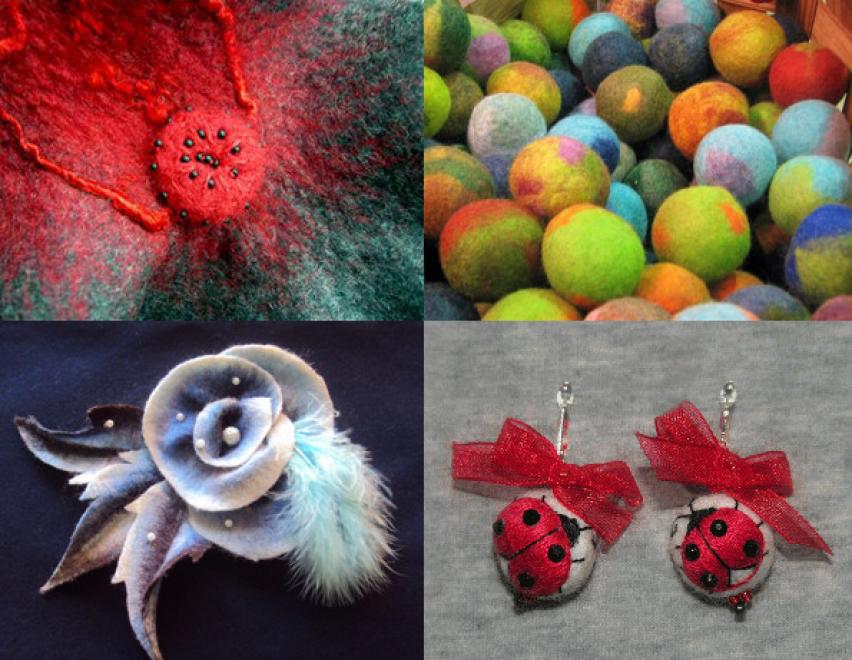 And certainly felt products are great for decorating your own apartment! Modern artisans have long overcame the "felt is good only for a carpet" line and can craft screens, paintings, coatings and even pictures! Such element of decor can attract the eyes of all your guests and friends! Special types of felt can be used even in the manufacture of decorative pottery - vases, bowls or plates. You can also furnish their homes with original furniture made ​​of felt, which was planted on the wooden frame and cohere in multiple layers! What would you say about a felt chair or lampshades? 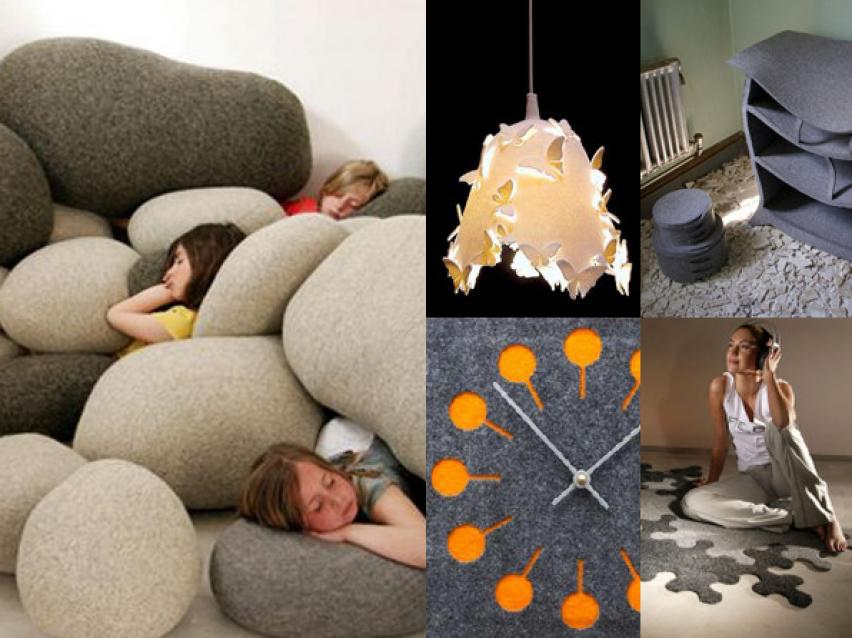 Finally felt is used in creating clothes. Felt is a natural product and retain heat, which makes it the perfect material for hats, scarves, slippers, and so on. There is also a designer felt, a real work of art! Felt can be stacked layers, glued, embroidered and combined with other materials, which kames you a proud owner of quite extraordinary and unique thing! 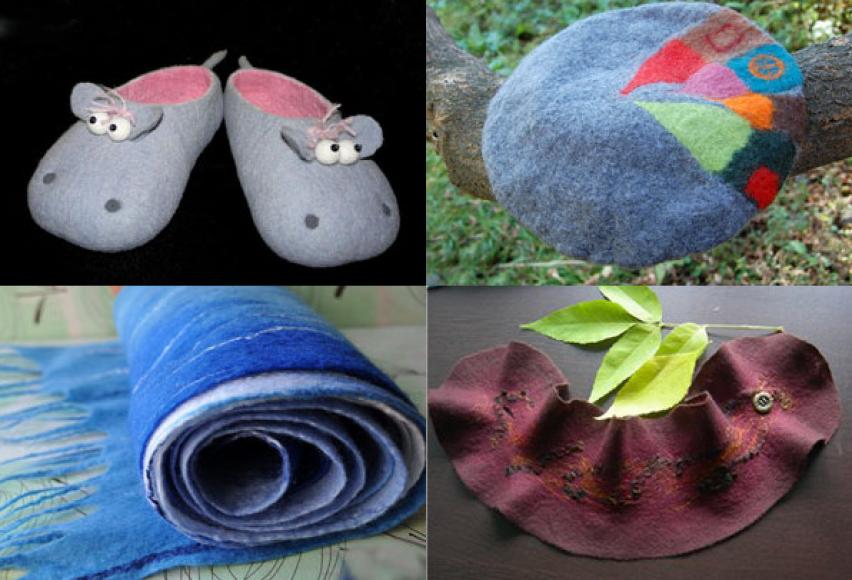 Today felt confidently stands on its position, preserving its historical significance. Felt still goes into the making of boots, but the young talents decorate them in many different ways. Artists paint felt and organize fashion shows and even sell author collections for considerable money. Thanks to modern technology and designers that adore this material, felt for years to come will delight us with their good old\new environmentally friendliness, softness and warmth.