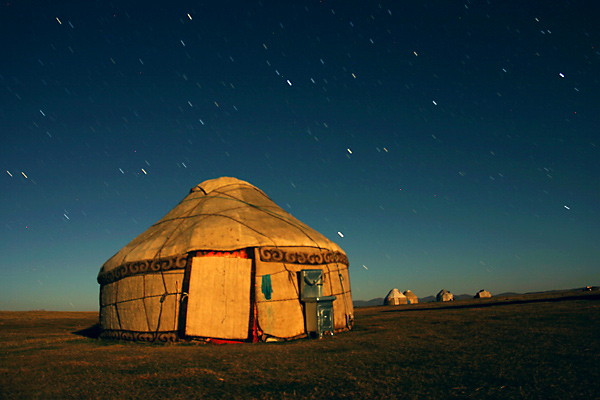 Moving from one place to another is inherent in nomadic way of life. Therefore, it is important to have a dwelling that is easy to assemble, disassemble and carry on pack animals. Yurt became such dwelling for Kyrgyz people.

The basis of the wooden frame of a yurt is composed of several elements. The setting of a yurt begins with the doorway “bosogo”, usually facing south or south-east. The walls are a grid of birch poles called “kerege”.  The base of a dome is also assembled of poles called “uuk”, then goes a rim called “tyundyuk”. Tyundyuk is used for entry of sunlight into the yurt as well as for going out of smoke. Tyundyuk is one of the most recognizable symbols of Kyrgyzstan, which is represented on the flag of the country. Outside yurt is covered with woven straw called “chiy” and thick felt “kiyiz”. The doorway is also covered with felt, or there stand double doors instead.

In the center of the yurt there is a hearth called “kolomto”. The back of the yurt is called “dzhyuk”. There you can usually see chests and folded blankets, pillows and carpets. Between kolomto and dzhyuk there is the place of honor called “ter”, where sits the head of the family or the most distinguished guests.

The right side of the yurt (“epchi jak”) is the female half, which holds stocks of food, dishes, various items needed in the household. The left side of the yurt is called “er jak”, the male half. There are a saddle, harness, weapons, animal skins. The floor and walls of a yurt are decorated with beautiful patterned rugs called “shyrdaks”.